Shorefront’s 2017 year was filled with activities, avocation, national forums and new partnerships. New acquisitions, the 5th installment of the Black History Month Lecture Series, participation with institutions from around the country and engagement with the schools have increased Shorefronts visibility and discoverability.

Shorefront recently partnered with the Schlesinger Library in Cambridge, MA to digitize 93 documents from the Edwin B. Jourdain Jr. collection housed at Shorefront. The documents will late be uploaded to a digital repository portal and eventually ingested to the UMBRA Research site. UMBRA specializes on important documents related to the African American communities across the country.

In partnership with the Evanston Chapter NAACP, The African American History and Genealogy Consortium and the Haitian Congress to Fortify Haiti, three community wide panel discussions were shared at the 5th Annual Black History Lecture Series event. Held on three consecutive Saturdays, scholars and community members shared their knowledge. All three sessions were filmed and archived at Shorefront. 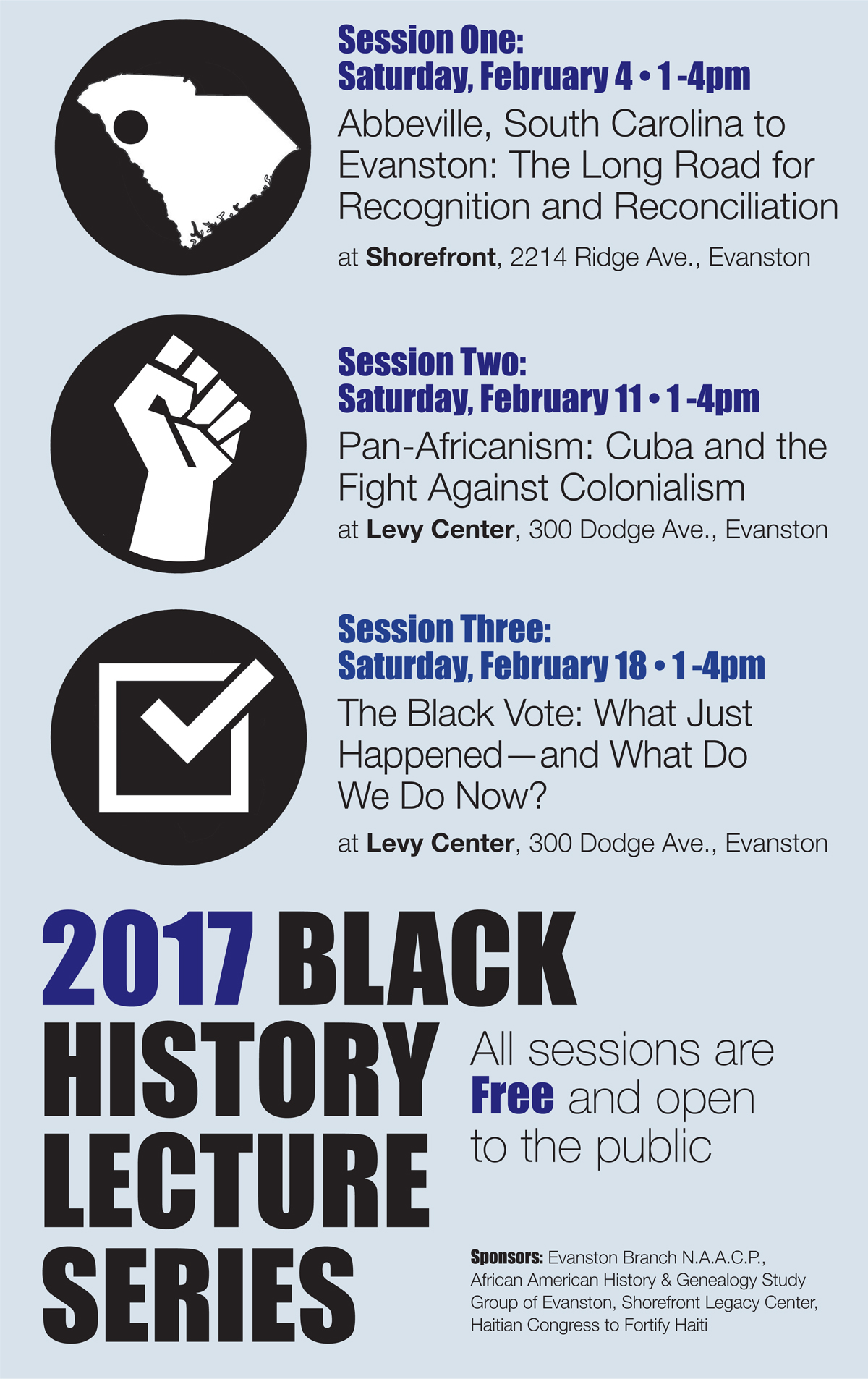 Lecture one was Abbeville, South Carolina to Evanston and the Long Road to Recognition and Reconciliation. Lecture two was Pan-Africanism: Cuba and the Fight Against Colonialism. Session three was The Black Vote: What Just Happened—and What Do We Do Now? Sessions were held at Sherman United Methodist Church and at the Evanston Levy Center and was attended by over 175 participants.

The new traveling exhibit “Legacies” has grown from 10 to 15 panels. For 2018, Shorefront will produce five new panels. The growing, multi-panel focuses a snapshot of historic and contemporary residents and organizations throughout the North Shore. In 2017, the panels were displayed at the Evanston History Center and soon at the Lorraine H. Morton Civic Center.

With the “Museum Grants for African American History and Culture”, Shorefront officially launched Shorefront Press — our publishing arm. Three books have been published: The Dream Dancers: New England Preservers of the Dream 1620-1924, by Spencer Jourdain; True Colors: Evanston Through Our Eyes, by ETHS 2017 Senior Studies students; and Edwin B. Jourdain Jr: The Rise of Black Political Power in Evanston, Illinois1931-1947, by Dr. Sherman Beverly. All of these books are available at Shorefront, Squareup Market and Lulu.com.

With the “National Leadership Grants for Libraries”, Shorefronts partnership with the Amistad Research Center, the South Asian American Digital Archive, Mukurtu, and the Inland Empire Memories Project of the University of California-Riverside was completed. As partners, we assembled a series of four forums where Evanston for the host for the third forum in May, 2017. All Forum activities are archived at www.diversifyingthedigital.org.

Shorefront and its activities is supported by membership, contributions and grant support. Shorefront is a 501(c)(3) nonprofit historical organization dedicated to collecting, preserving and educating people about Black history on Chicago’s suburban North Shore. It is publicly supported through grants, contributions and membership. The Legacy Center is open to the public for research initiatives.