The board and volunteers of Shorefront has had a busy schedule since our last update summer of 2015. New acquisitions, interns, exhibitions, avocation and recognition have all taken place over that time period cumulating into a very busy 12 months. We even did some light renovation to the Legacy Center and was a feature on Channel 9 during the Evanston Black Business Tour organized by the owners of Yo’ Fresh Frozen Yogurt. If you have not been by, you should visit.

As an active collecting repository, donations to Shorefront’s archives have grown. New items acquired come from individuals and organizations and include Ebenezer A.M.E., Opal, the ETHS Black Male and Black Female Summit, example pieces from local artists, Evanston Neighborhood Conference, The Triangle Club, Community Hospital, Foster / Lab Experimental School, Evanston Own It and dozens of smaller items. Many of these new items will be incorporated into current collections.

Throughout the months, Shorefront has been engaged with community outreach through lectures and discussions. Founder Dino Robinson participated in discussions on and about local history at Leadership Evanston, the Evanston Public Library and at the Black History Month Kick-off at Fleetwood Jourdain Community Center. There, Evanston Mayor Tisdahl presented the organizers with a proclamation recognizing Black History Month events, now on display at the Legacy Center. Dino also spoke at the Digital Archives Panel at the University of Michigan in April and will speak in October this year at UCLA on and about community archives. 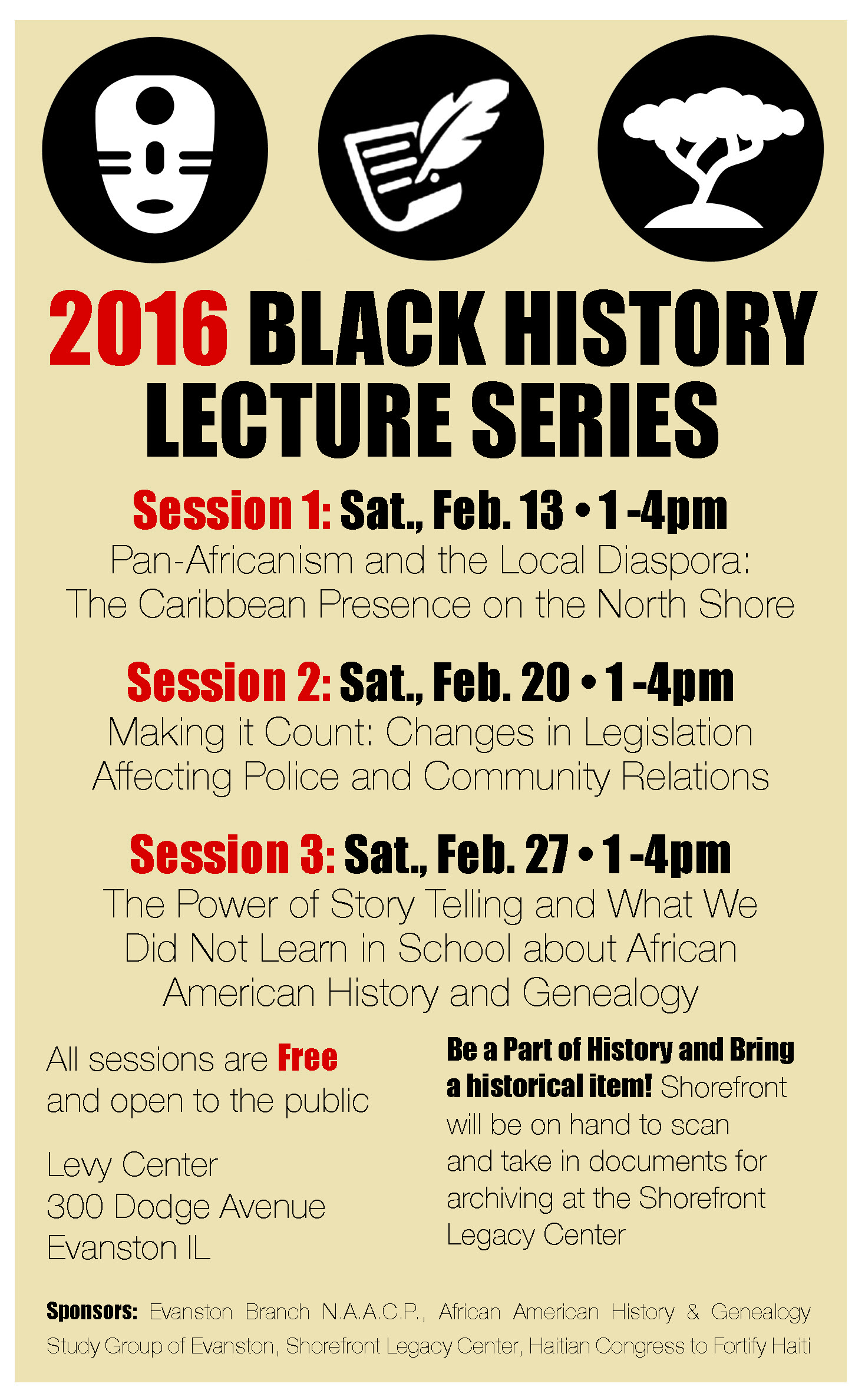 In partnership with the Evanston Chapter NAACP, The African American History and Genealogy Consortium and the Haitian Congress to Fortify Haiti, three community wide panel discussions were shared at the 4th Annual Black History Lecture Series event. Held on three consecutive Saturdays, scholars and community members shared their knowledge. All three sessions were filmed and archived at Shorefront.

Session one was on Pan-Africanism and the local island communities. Local panelists, Jude Laude, Sharon Staine and Bob Parris gave presentations on the Haitian, Belizean and Jamaican presence on the North Shore. Dr. Anna Castillo gave an informative presentation on early South and Central America early presidents, governors and leaders of African decent.

Session two focused on legislature that has an impact on community and police relations. Panelists were Margaret Stapleton of the Shriver Center, Patrick Keenan-Devlin of the James B. Moran Center for Youth Advocacy and Shyriden Carmichael of the Cabrini Green Legal Aid.

Session three focused on the theme of “telling your story”. Panelist were Gwen Rucker on the Mormons work in Genealogy, Arthur Amaker on the Maroons in American, Kim Chase on historical Black towns and Ayinde Jean-Baptists on Haiti.

Mid 2015, Shorefront introduced a new traveling exhibit series entitled “Legacies”. The growing, multi-panel focuses a snapshot of historic and contemporary residents and organizations throughout the North Shore. The first set of five panels was unveiled at the One State Conference organized by the Illinois Arts Alliance. The panels were also shown at the Justice For Peace exhibit at the Noyes Cultural Arts Center and at the 2016 Black History Month Kick-off event at the Fleetwood Jourdain Center. Plans on introducing additional panels to add to the exhibit will be ready by end of year. 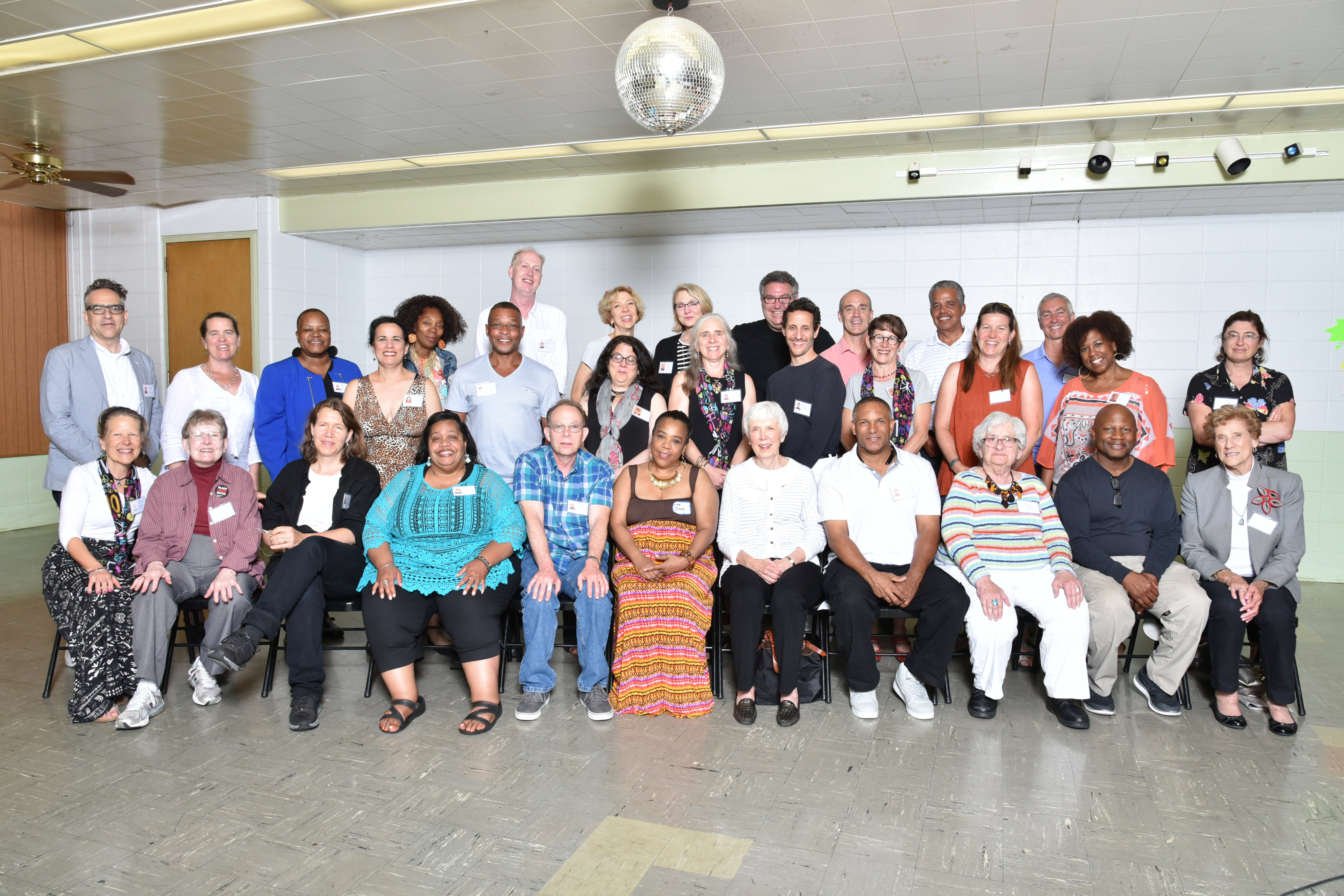 Mid July, Shorefront partnered with the Foster/Lab Experimental School Kindergarten 50th Reunion committee. The event attracted over 60 people – former students, teachers, administrators and community activists. Breaking the norm of reunions, this gathering focused on two themed panel discussions; We Were There and Where Are We Now? in reflection of the times when Evanston was beginning its school integration processes and evaluating what has changed today. In addition to the panels, Shorefront interviewed 15 former kindergarten students and administrators on their experience in the beginning of King Lab school. The resulting interviews is slated to be incorporated into the 1967 film by Larry Brooks, The Integration of Foster School for a 2017 release.

Shorefront is excited to be a recipient of the Institute of Museum and Library Services (IMLS), “Museum Grants for African American History and Culture” and as a collaborating partner with the “National Leadership Grants for Libraries”. The first award furthers Shorefronts work to grow a focused collection on the Jamaican and Haitian communities, expand its board, solidify partnerships and produce a collection of publications.

The second collaborative grant involves The Amistad Research Center, the South Asian American Digital Archive, Mukurtu, and the Inland Empire Memories Project of the University of California-Riverside for a series of forums focused on integrating community archives in the National Digital Platform. The January 2017 forum is slated to be held in Evanston, hosted by Shorefront.

The Institute of Museum and Library Services is the primary source of federal support for the nation’s 123,000 libraries and 35,000 museums. The mission is to inspire libraries and museums to advance innovation, lifelong learning, and cultural and civic engagement. The grant making, policy development, and research help libraries and museums deliver valuable services that make it possible for communities and individuals to thrive. To learn more, visit www.imls.gov and follow IMLS on Facebook and Twitter.

Lastly, Shorefront is intentional in encouraging families and organizations to consider donating items to local repositories and supporting efforts in creating archives. Over the years, Shorefront’s work helped grow its archives and encouraged other families and entities to do the same. Two organizations, the North Shore Ushers Guild and the Northwestern University Black Alumni Association has consulted with Shorefront while they work in preserving their own rich history.

Shorefront and its activities is supported by membership, contributions and grant support. Shorefront is a 501(c)(3) nonprofit historical organization dedicated to collecting, preserving and educating people about Black history on Chicago’s suburban North Shore. It is publicly supported through grants, contributions and membership. The Legacy Center is open to the public for research initiatives.